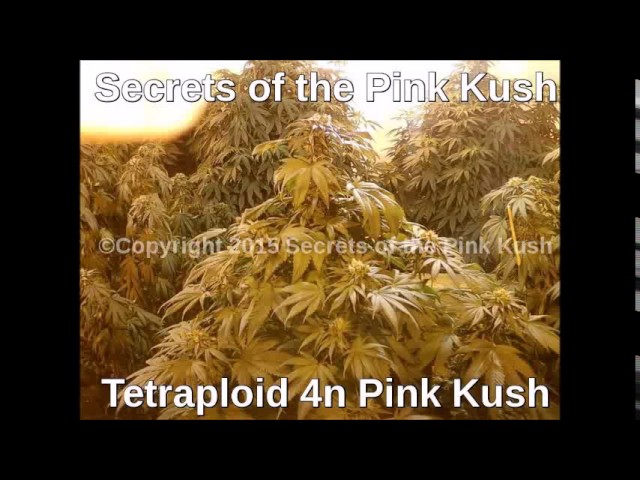 Seeds
Share on Facebook
Share on Twitter
Share on Pinterest
Share on LinkedIn
Secrets of the Pink Kush: Cannabis Seeds and Genetics
by Billy Budd
Become a Master Grower:
If you want to win the Cannabis Cup or produce superior cannabis then you must understand polyploids. This is the only book in the world that can provide that information. Read the book or be left in the dark…NOTHING ELSE LIKE IT.

Partial Video Transcript
====================
Seeds and Resulting Genetics:
Many people, quite incorrectly, believe that the seeds that they obtain from a given plant are the exact same strain as the mother plant. This can be correct but is usually wrong.
When you obtain seeds from any given plant those seeds are not necessarily the same genetics as that plant and may not even be at the same ploidy level. For those who have read Secrets of the Pink Kush, you should already be familiar with these concepts.
The only way you will get the same strain is if you self it (S1), reverse it (R1) or have an interbred line (IBL). Selfing and reversing are done by using silver nitrate or colloidal silver to create male pollen sacs and then using that pollen on the same plant (S1) or another cloned plant from the same mother (R1). See Volume III of Secrets of the Pink Kush for details and procedures. S1 and R1 seeds are feminized and thus have deficient genetics in that they will have a tendency to become hermaphrodites. I do not like feminized seeds for this reason as well as other genetic reasons. Regular seeds are superior, you simply must take the time to sex them for quality plants.

If you are using an interbred line and especially a pure landrace indica or sativa then the resulting genetics will be the same. This is not true for hybrids as they will create different genetics based upon the probability distribution of Mendel’s Laws (see Secrets of the Pink Kush Volume I). For example, we just did some Texada Time Warp seeds. These seeds were grown outdoors and accidentally became seeded. These seeds are now being grown out and are all showing to be exactly the same. This is good news as IBLs are much better due to their consistency and should be more robust. Texada Time Warp is an old B.C. outdoor strain that has been around for 30 or 40 years or more. It was made famous by the hippie growers on Texada Island. It is good outdoor strain due to its shorter flowering time and high sativa genetic content. It appears to be a stabilized hybrid which is called an IBL.

The IBL when crossed with another IBL or pure strain such as sativa or pure indica should be good for creating a true filial generation 1 (F1) which means it should exhibit heterosis or hybrid vigour. Heterosis is nature’s way of providing a boost to the offspring of two divergent species. The children of the F1 (f2, f3, f4, etc.) will not exhibit heterosis. Heterosis means more vigorous growth, more robust and more potent. The F1 generation will also be stable in that all seeds will produce plants that appear to be an IBL but are not as they will not breed true. Their children will again conform to the probability distribution of Mendel’s Laws (Volume I of Secrets of the Pink Kush).

If you mating one ploidy level to a different ploidy level (see my polyploid formula in Volume III of Secrets of the Pink Kush) then the resulting genetics will be totally different. e.g. Diploid mated with a tetraploid will create a sterile triploid which will be more potent than the diploid but not as potent as the tetraploid. This is actually documented in Genesis 6:4 as the Bible was written by tetraploid humans who are much superior in size, strength and intelligence compared to us diploid humans. The same goes for plants.

I hope that helps in your understanding as this is a very difficult topic so please feel free to ask questions in my Cannabis Master Growers class on Facebook as I do not expect everybody to understand these concepts at first. Understanding these concepts is the key to making great strains that can be replicated and will retain their intended genetics. See how I designed my Diablos Kush strain in Volume III of Secrets of the Pink Kush. It is very comprehensive and provides complete details for replication (an essential part of the scientific method).

Marijuana grow house goes up in flames near Indiantown
How medical marijuana is made in Florida
Sage Marijuana Cannabis Seeds
How Does Legalization of Marijuana Impact Employers?
KC dispensaries react to marijuana legalization being placed on ballot